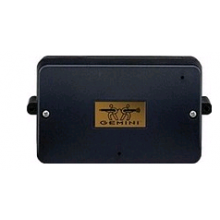 GEM-RECV Series receivers are the hardwired interface to Napco's Wireless-Ready Control Panels. The wireless system comprises a compatible GEM-Series control panel, at least one GEM-RECV receiver and one or more companion GEMSeries transmitters. The transmitters may be wireless smoke detectors, space-protection devices, window/door sensors, or other devices that report zone status and supervision information to the receiver without the use of wires.

The GEM-RECV255 will accommodate up to 255 wireless zones.The receiver is connected to the control panel's 4-wire bus. The receiver monitors each transmitter, updating transmitter status as reports are received, and conveys this information to the control panel. Also monitored is the elapsed time since the last report from each transmitter. If no report is received within a pprogrammed time, a Supervisory Failure will result.